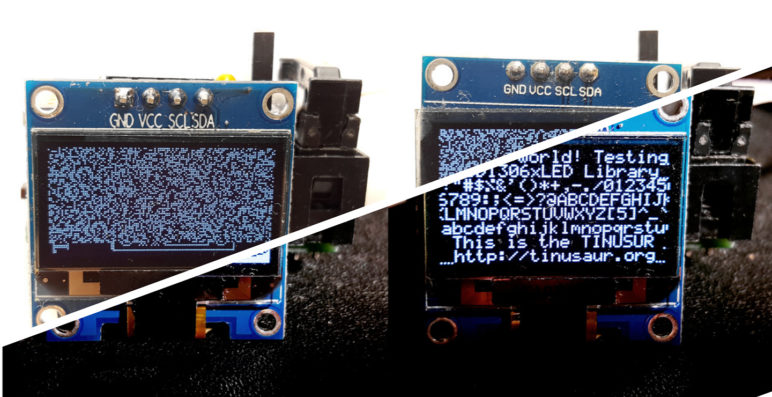 Our SSD1306xLED library works well with the SSD1306 displays, it is small as binary code and is very fast.

But, there was a problem …

Several months ago we ordered some displays from the Far East and we expected them to work just fine. Unfortunately, they did not. And the problem was not in our library but with the chips. Instead of SSD1306, it seems they put the not that well known SSD1315 OLED display controller. We found that out by looking closely at the PCB, beneath the LCD glass plate.

The testing script was producing the result shown in the picture. Note the bottom lines – they were not redrawn, or not always, at least.

On another display that we’ve got earlier, a few years ago, and that was using the SSD1306 controller the picture was looking good.

Apparently, the problem was with the display controller. Further experiments proved that.

What made it worse for us was that we’ve discovered that from about a hundred display modules we’ve ordered recently half seemed not compatible with our code. We couldn’t even figure out what exactly was the OLED controller on those modules –
SSD1306 as stated in the description where we bought them, or the SSD1315 looking at the testing scripts results. So, we decided to just fix the problem for both kinds of chips. Easy to say it than to do it.

2 months ago. We played with the timing and the speed of the data sent to the modules. Tried a few other things, like reordering the commands sent while drawing. We even moved some of the I2C specific code to a separate library to isolate the potential problems and try to fix the issue. No luck.

2 days ago. We decided to re-do the initialization sequence for the OLED controller. These are the commands that we send to the chip before we start drawing things on the display. We read, again, the Solomon Systech PDF file about the SSD1306 controller – the so-called datasheet. There was a half-baked algorithm of how to initialize the chip. Also, looked at several other libraries to see how they do it. Actually, the “Adafruit_SSD1306.cpp” was a really good example so we used some know-how from it.

Wrote the code. Tested it. And, it worked!

There were a couple of TO-DO’s in the source code for the optimization of multiplication by a constant. That could be easily converted to a combination of 1 or more left-bitwise-shift and additions.

That saved us about 30 bytes of binary code and it is probably a bit faster than the multiplication with a subroutine.

We did something similar for the void ssd1306tx_stringxy(const uint8_t *fron_src, uint8_t x, uint8_t y, const char s[]); function but without the left-bitwise-shift as the compiler optimizes the very well the multiplication with numbers that are powers of 2, i.e. 2, 4, 8, etc. In our case – 16. That saved us another 20 bytes of binary code and probably gained some speed.

So, we saved about 50 bytes of machine code and gained some speed. That might not look that much but for a microcontroller with 4096 bytes for code and 1 or 8 MHz CPU that’s about 1.2% less memory usage. And, our library is now a bit faster.

The official page of the library (will be):
/software/libraries/ssd1306xled/

Source code is available at:
https://bitbucket.org/tinusaur/ssd1306xled/src

One thought on “Updated SSD1306xLED library, fixes, compatibility with SSD1315 and more”