In fact that isn’t very difficult to do.

According to Wikipedia … the buzzer or beeper is an audio signalling device, which may be mechanical, electromechanical, or piezoelectric. Typical uses of buzzers and beepers include alarm devices, timers and confirmation of user input such as a mouse click or keystroke. 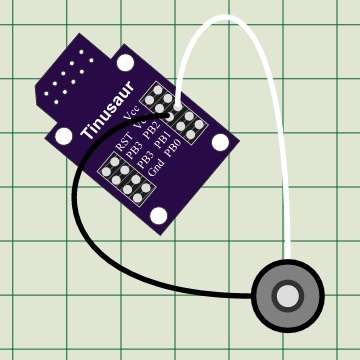 We will use electromechanical buzzer. When voltage is applied to it its membrane moves up (or down, depending on the particular device) and respectively when there is no voltage the membrane goes back to its normal position. Applying constantly changing voltage will generate audio waves perceived by us as a sound.

This time instead of _delay_us() we will use the _delay_loop_2() function. According to the _delay_loop_2(int) documentation it produces 4 empty CPU cycles per iteration – in other words with parameter 100 it will produce delay of 400 CPU cycles. That tells us that the maximum is 65536 x 4 = 262252 cycles. That, at 1MHz CPU clock, is approximately 262 mS (milliseconds) maximum delay, … or about 3.8 Hz minimum frequency – perfect for our experiments.

After building and uploading this should start making sound like of a car alarm.

With similar techniques a lot more complex sounds could be generated.

One thought on “Tutorial 003: Making Sounds with Buzzer”

This site uses Akismet to reduce spam. Learn how your comment data is processed.